So last week I made a cute arrangement in little red wagon that was a wintry collection of pine cones and twigs - apparently the client did not want a winter look but was more interested in a spring arrangement based on something that had been done before with wheat grass and gerbers.  It was too late to order wheat grass so we covered foam with moss and used lycopodeum for a feathery grass, put large gerbers into stem tubes and then water tubes and voila. 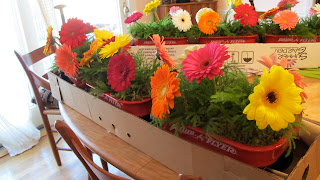 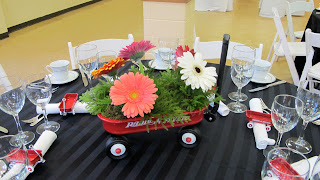 I have been doing alot of weaving with different materials lately - and I made these leaves last week. 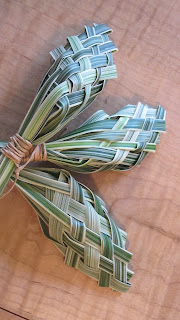 They are woven from varigated lily grass in a simple manner - tied off with wire - for a more polished presentation I would wind lily grass over the binding.   I like these - they would add another texture to a bouquet or arrangement that is unusual.
Posted by Chic Floral Designs No comments: 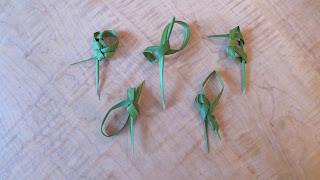 I am a fan of simple boutonierres.  I find that for the most part, our grooms and other members of the wedding parties want a clean looking piece.  I made this series of grass boutonierres the other day and think they can stand alone or they can be enhanced with a small flower and would be an interesting alternative to our usual single rose or calla.
Posted by Chic Floral Designs No comments: 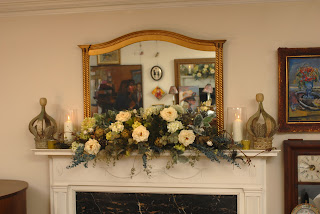 Another mantle I decorated for Christmas.  I used silk and dried flowers and loved the combination of textures and colors.  Mantles are one of my favorite things to decorate - the parameters are clear and it is fun to layer  the elements.
Posted by Chic Floral Designs 1 comment:

Today I have been working on a sample for a dinner next week.  The host is providing little red wagons - about 10 inches long - and they want a piece made of up cones and stuff kids might pick up outside. 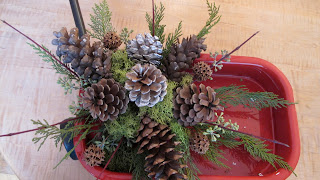 I decided that I would make a little wreath of cones, twigs, moss and some eucalyptus berries and see if this works for them.  I like the way it sits to one side and the vibrant red of the wagon works with the natural materials.
Posted by Chic Floral Designs No comments: 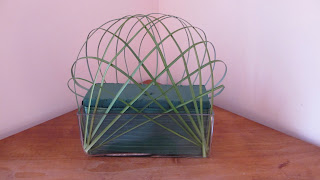 I am playing around with grasses in a linear manner to add volume to an arrangement and this piece (without flowers) is something I came up with today.  I love the regularity of the grasses and how they keep a nice organized woven shape on the top and in between the glass and the oasis wrapper.  I like the fact that is relates to basketry - a craft that I taught myself at my first college as a way of avoiding writing a paper (sorry anthropology dept. at Drew).  A  nice dome of a single flower would be fun in this piece or a multi color and form arrangement may work - that is the next step.  It actually should be the first step but I had to get the grass arrangement working first!
Posted by Chic Floral Designs No comments: 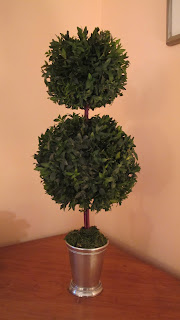 Today we delivered 4 little boxwood topiaries to Restaurant Nora for her upstairs Gallery dining room.  We used red twig dogwood stems and real boxwood in silver julep cups - they will slowly dry out and should look good for several months or more.  This year we have done more with boxwood than in previous years and learned a few tips.
Posted by Chic Floral Designs No comments: 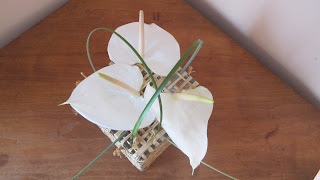 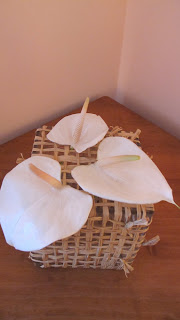 I have a BFA in textile design from the School for American Craftsmen in Rochester, NY.  We had too much fun during that time (my husband was there for furniture design).  I loved weaving and still hold on to my wonderful Macomber loom and yarn in hopes of getting back to things at some point.  For a long time I have been thinking about how to incorporate weaving into floral design and again, as a result of the work with Ruth (see the previous post), I have been trying some things out.  For this piece I wove a scaffolding of raffia all around a square glass vase tieing pieces together and making the random pattern of the knots part of the overall design.  I wanted to use a dramatic flower in this piece, one that was tropical since the raffia refers to that type of look,  so I got some white anthirium flowers and kept them low so there was a nice contrast between the smooth surface of the flowers and the rougher surface of the raffia.  I then wove some wire grass in leaving large loops in order to create some linear volume.  Again, just an experiment, but certainly fun.   Just like craft school.
Posted by Chic Floral Designs No comments: 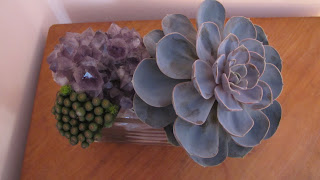 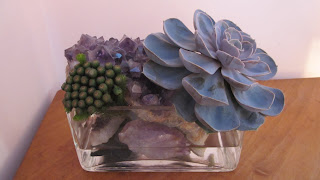 My friend Ruth is a professor of design at UMD.  Next week she is going to speak to my floral design group, IFDA,  about a personal approach to design.  I have been playing around with some of he techniques she will be speaking about and will begin to post some of the arrangements I am coming up with.  Most of them are not fully realized works and may need some refinement - think of them as 3 dimensional sketches for the time being.

This first piece began with the purchase of this beautiful chunk of amethyst last week.  I wanted to use it as an integral part of an arrangement and was happy to get this large echevaria blossom in a great purple color.  I put the amethyst in the vase and propped the blossom on the top, added some smaller chunks of stone in the lower part of the vase and finally put some brunia in for more texture.  An interesting note - when Ruth saw this piece, she liked it but noted the water level and we raised it until it became a better part of the design as a whole.
Posted by Chic Floral Designs No comments: 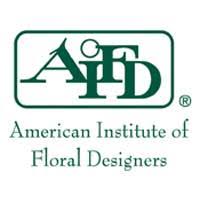 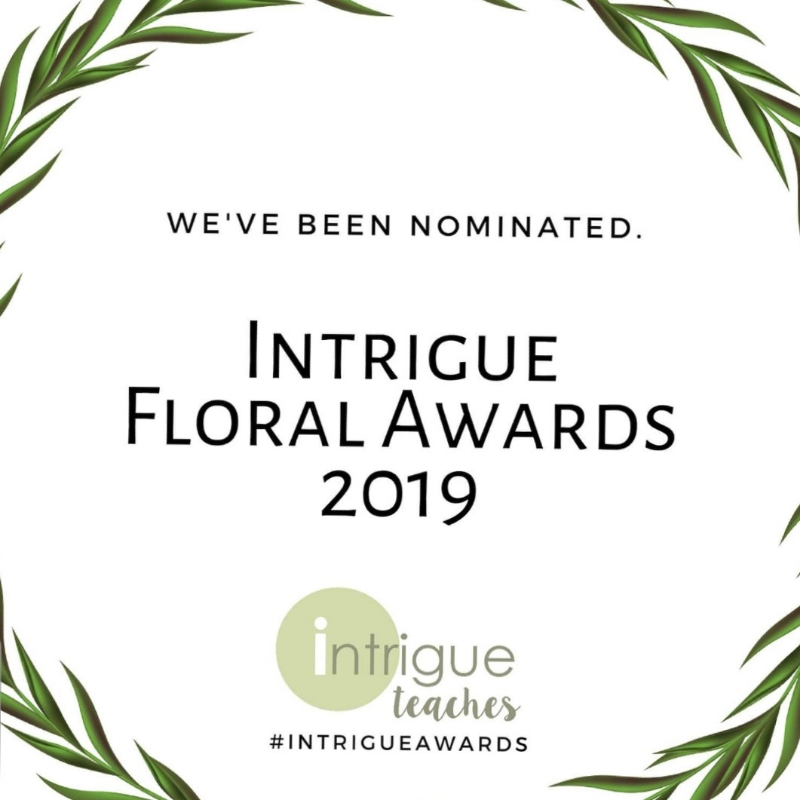 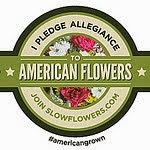 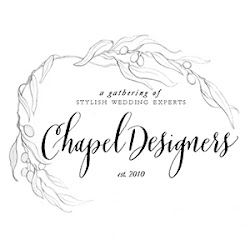 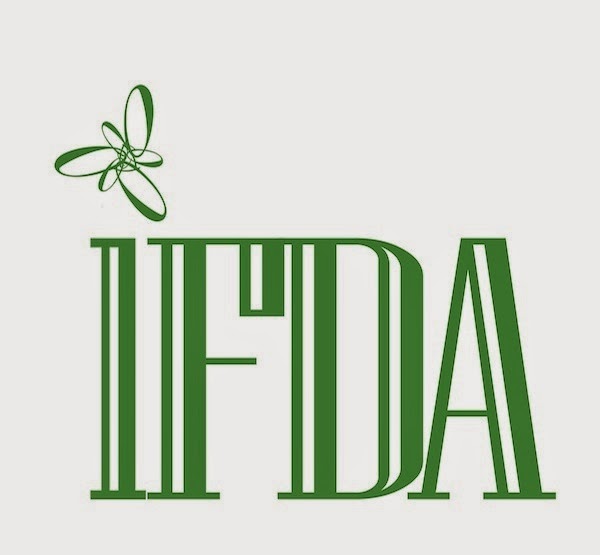 Chic Floral Designs
Bethesda, MD, United States
I am a Washington DC area floral designer with over 15 years of experience. I have a BFA in Weaving and Textile Design and often incorporate elements of those disciplines into my work. I work in a wide range of styles to suit the various needs of clients. I am a proud member of both the Chapel Designers and the Independent Floral Designers Association and am rated on Wedding Wire. As a student of Ikebana, I often apply those design forms to my own work. I work on my own and with a number of other designers and students to expand my artistic sensibilities. My arrangements have been featured in a large number of venues including The White House, the French Embassy Cultural Center, The National Botanic Garden, and Blair House. Contact me at 301.675.1728 or esea654@gmail.com. I am also on Facebook at Ellen Seagraves Chic Florals.